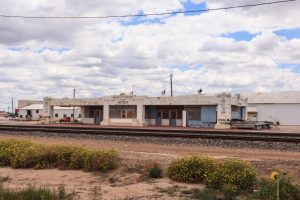 The Scurry County Historical Commission, based out of Snyder, sent out a press release Wednesday (Nov. 1) lamenting the impending demolition of Snyder’s Santa Fe Railroad Depot.

According to the historical commission, numerous articles, countless emails, media stories, and meetings to discuss the fate of the Santa Fe Depot have taken place since 2008. The historic depot is one of four designed by acclaimed architect Louis Singleton Curtiss. During the rail industry expansion in the early 1900’s, the depot proved to be a positive economic driver for Snyder. It served as a passenger depot and has seen its fair share of military troops departing and arriving during the war years, even into the Vietnam era. It played a pivotal role as a freight depot during oil boom years. In 2011 it was placed on Preservation Texas Most Endangered list. After its demolition, the depot in Post will be the only one left of the four.

“The expertise in Louis S. Curtiss’ design and the craftsmanship of that era is why it remains standing after 106 years. Only after the railroad ceased using the depot and decades of neglect has it been relegated to its present state. The demise of this building is just one more story, one more chapter in what happens when buildings of historical and architectural significance are ignored for years,” said a Scurry County Historical Commission spokesperson.

The SCHC has worked diligently to find an alternative to demolition. However, a demolition company will mobilize and arrive in Snyder to begin the process of razing the depot on Monday. The commission and the Scurry County Museum have worked closely with representatives of the demolition company to ensure that every effort will be made to save significant architectural aspects of the building. They will be archived at the museum for future exhibits and studies. 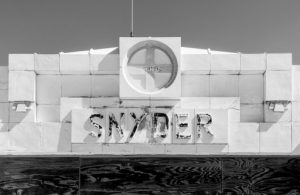 Above and Right: Members of the Scurry County Historical Commission and Scurry County Museum hope architectural elements of the Santa Fe Depot can be preserved. (Photos courtesy of Bronson Dorsey, www.lost-texas.com) 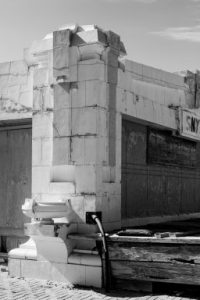 A last-minute collaboration between Dr. Tai Kreidler with the Southwest Collections at Texas Tech and Dr. Elizabeth Louden (retired preservationist professor at Tech) may yield a 3D scanning of the depot. The information from the scan would be invaluable and would be stored and archived at Southwest Collections for future projects. “Dr. Kreisler and Dr. Louden have made every effort in the 11th hour to guarantee that our depot and Louis S. Curtiss are not forgotten,” the SCHC spokesperson said.

UPDATE: In an e-mail received Friday morning from Dr. Tai Kreidler of the Southwest Collections at Texas Tech University, it was confirmed that he and Dr. Elizabeth Louden (retired preservationist professor at TTU) will do a 3D scan of the depot on Saturday (Nov. 4) at 9 a.m. “Anyone is welcome to be there to watch the process … once she starts the process, she will need to focus on the scanning,” Kreidler said. The scan and any architectural drawings completed will be archived at the Southwest Collection and could also be filed with the Library of Congress via the Historical Architectural Building Survey.