Slaton native and Lubbock music royalty Don Caldwell was featured in the June 17, 1965, issue of The Slatonite along with another Slatonite, Jimmy Marriott. 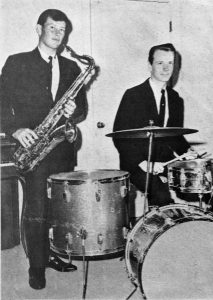 Saxophonist Don Caldwell and drummer Jimmy Marriott, both formerly of Slaton, play with the Notations, Ted Tyler’s backing band in 1965.

According to the article, the two had recently returned from a trip East with a combo called Notations. They backed Lubbock vocalist Ted Tyler. At the time, Caldwell was a sophomore at Texas Tech University and Marriott would start there in the fall.

The group performed at several clubs in New York City and Scranton, Pennsylvania as well as on “Sid Freeman’s Coca-Cola Bandstand,” which was, at the time, a well-known eastern regional TV program.

Tyler’s primary motivation for the trip was to take a Texas band East, the article said.

On the trip, Caldwell and Marriott experienced their first instances of signing autographs.

Thanksgiving service to be held Sunday