“I wanted there to be a sandstorm today,” said Chele Miles as she and her family toured the South Plains Veterinary Clinic on a mid-November Saturday morning. The ever-reliable West Texas wind very nearly granted her wish. A chilly, blustery morning had greeted us – the kind that means you’ll be wearing your hair back and any loose papers in your car will soon be in the street.

But it was cozy inside the vet clinic as Dr. Bud Farr led the group around, explaining how the place has changed over the years. Those changes were of special interest to Dr. David Hughes and his wife, Patty, who built the clinic in 1964 after moving here from Pampa with their one-year-old daughter, Chele.

Dr. Farr has added more buildings over the past few decades, and a few years ago he revamped the reception area and two exam rooms. “It’s totally different,” said Patty. “I wouldn’t have recognized it.”

Though Dr. Hughes no longer practices veterinary medicine, he had plenty of questions for Dr. Farr about how the clinic and the practice have changed over the years. “I am astonished at the development in tools and sophistication of the practice. I’m most gratified about that,” Dr. Hughes said. 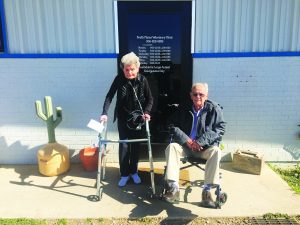 Dr. David Hughes and wife Patty finish their tour of the South Plains Veterinary Clinic, which they built in 1964, on Nov. 18, 2017. The couple brought their daughter and grandchildren along on the weekend trip to visit old friends. (Submitted Photo/Tom Dulin)

The Hugheses moved here in the mid ‘60s and stayed for almost a decade, during which time they built a successful veterinary practice, raised two daughters (Chele and her sister, Amber), and became active citizens. The young Dr. Hughes served as city commissioner from 1968-1969 and was elected mayor in 1969 when he was just 30 years old. He served until 1971.

But Slaton was only one stop on road. They sold the clinic to Dr. Farr in March 1972 and headed to Knoxville, Tennessee, where Dr. Hughes began a career in the meat industry. His new field took the family to Memphis, Tennessee, Phoenix, Arizona, Sioux City, Iowa, Lyle, Illinois, Fort Worth, Marshall, Easley, South Carolina, Grant, Alabama, Albertville, Alabama, and finally Madison, Alabama, where they now reside.

“I miss the smallness of the town [Slaton],” but “I have enjoyed just about every place we’ve ever lived,” said Patty. “We’ve met lots and lots of interesting people.”

Also along for the tour  – and their first trip to Slaton – were the couple’s four grandchildren, Josh, Ellerie, Sally, and Jed. Their excitement at finally seeing the setting of their parents and grandparents’ stories was catching, though Ellerie expressed her initial reluctance to come.  “I had a picture in my mind of what it was going to be,” she said, expressing her fear that the reality wouldn’t live up to her idea of the place.

But as everyone gathered to sit and talk, the four took turns requesting stories from their grandparents. Hearing them again – these stories they had heard all their lives – must have taken on special meaning for them. Now they had personally seen the clinic where their grandfather set up his practice and the highway and railroad tracks where he chased livestock time and time again in the ‘60s and ‘70s (chasing loose horses and cattle featured in several of the stories told that day).

Chele shared stories of her own. She spent the first nine or so years of her life in Slaton, every minute of which seemed to be filled with mischief. Two of her “partners in crime,” as Patty called them, were Tom Dulin and D’Jane Brown.

When they were 5 or 6 years old, the three overheard a man say he was going to barbecue a goat he owned. Chele frantically raced to her house and piled all of her pennies into her shirt. They went to the man’s house and told him they were willing to buy the goat so it wouldn’t be killed. He laughed and said, “Take the goat. Keep your money.”

So the three headed back to Chele’s home on 17th Street with goat in tow – Chele holding it around the neck and trying to hold the pennies in her shirt and Tom and D’Jane herding from the rear. Patty was not pleased to see the goat in her home, however, so Dr. Hughes took it to live at the clinic.

The morning was full of stories like these. The couple recalled those who used to work with them – Tince Fondy Thacker, Larry Bownds, and Commie Oats among them. Chele said she learned to spit and chew tobacco from the men who worked at the clinic (though she admitted to only trying tobacco once).

Patty remembered how many different hats she wore as the clinic became established. She started the day teaching second, third, and fourth grade at West Ward Elementary, then picked Chele up from the babysitter and headed to the clinic to help out. She acted as receptionist, janitor, and even surgery assistant.

One day Dr. Hughes was out on a call and Patty was alone in the office. A man brought in his dog to be vaccinated. Patty explained that she couldn’t do it and the vet was out. The man insisted his dog be vaccinated, so Patty obliged – that is to say, she stuck the syringe in one side of the dog’s skin and out the other, releasing the vaccine into its fur. The man didn’t notice and she charged him $5.

Most of the stories told that day included a man very special to the clinic throughout the years, Larry Washington, or “Mr. Larry,” as the family calls him. Larry was able to drop by the clinic mid-morning, and it took several minutes for the hugs and tears to subside. “I’ve missed him all these years,” Dr. Hughes said. 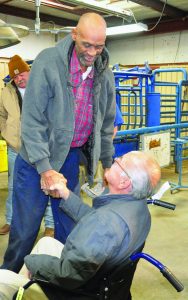 Larry Washington (left) and Dr. David Hughes meet again after more than four decades on Nov. 18, 2017, at the South Plains Vet Clinic. Washington started working at the clinic for Dr. Hughes in the ‘60s when he was about 11 years old, and he has worked there ever since. (Slatonite Photo/D’Etta Brown)

Dr. Hughes used to keep cattle at the old gin yard and he went every morning to check on them. That’s where he first saw Larry. “I checked on them, too,” said Larry. He was perhaps 11 or 12 years old at the time.

After that, Larry visited the vet more and more often, and Dr. Hughes would take him fishing or for a hamburger. “I took him in and he worked for us and lived with us,” Dr. Hughes said. “And we loved him,” Patty added.

Larry became Dr. Hughes’ right-hand man, and he continued working there after Dr. Farr bought the clinic. He retired earlier this year.

That evening, a group of old friends gave a dinner in the Hugheses’ honor at the Mercy Retreat Center. It was the culmination of a day of sharing and remembering and the capstone on a homecoming. “This is one of the best days of my life,” Dr. Hughes said.

“This is home. We moved from place to place, but this is where I got to be who I am today,” Chele said as the evening drew to a close.

The Hugheses and their clan left the next day, but their short trip made one thing clear: Even after 45 years and countless miles, a home like Slaton is always waiting for you to return. 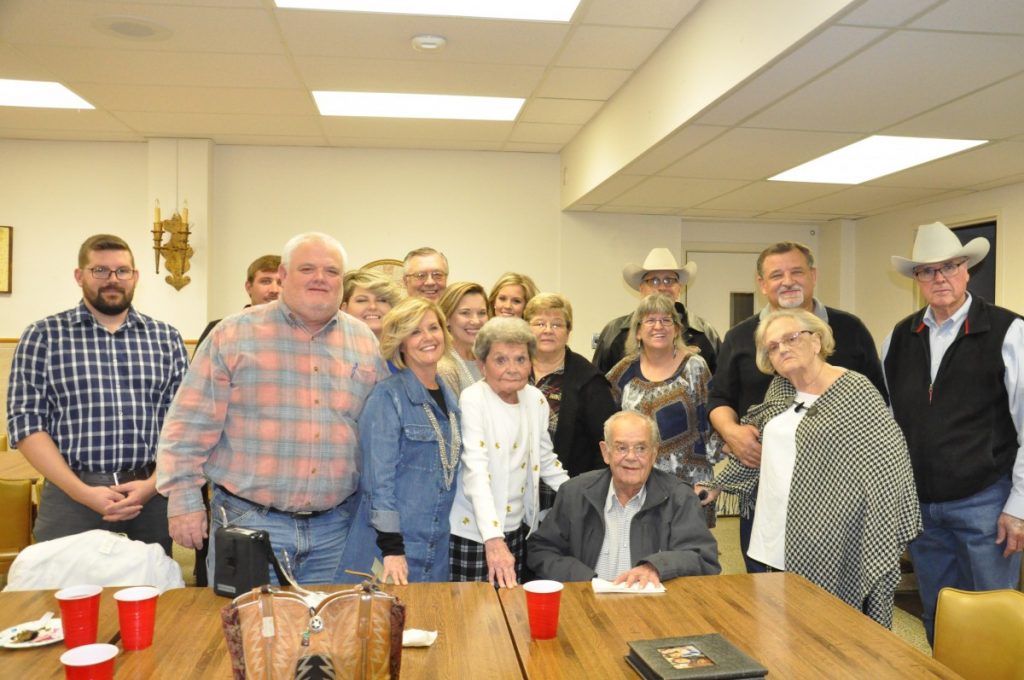