Months of hard work, careful raising and training were put to the test Saturday (Jan. 11) as Slaton FFA students participated in the annual Slaton Livestock Show.

A total of five steers, five heifers, three goats, four sheep and 66 swine were shown. A live and silent action was also conducted.

Not ‘The End’: City to reopen library

Deadline to file for May election Friday (Feb. 14) 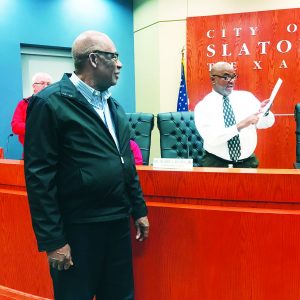 Peoples honored for 50 years of service as pastor