Defying all odds, the Tigers are in the second round of the playoffs after an impressive defensive game against Kermit.

The Tigers traveled to Big Spring on Saturday (Nov. 18) already excited about being in the playoffs and left with even more zest as they narrowly defeated Kermit, who was ranked second in their district after a loss to Wall the week before.

The Tigers led the game, but the Yellowjackets did not make it easy as they began to climb their way back on top of the score board in the third quarter. However a tough Tiger defense never let up, and the Yellowjackets could not find their way into the end zone in the fourth quarter.

Kevondrick Gober, Dajahnay Williams, and Eli Martinez all put touchdowns on the board and 3 points tacked on by Lazaro Galindo sealed the deal for the Tigers with a 21-17 final score in favor of the Tigers. 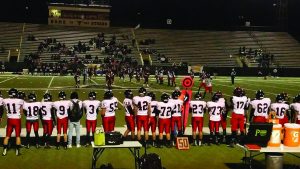 The Tigers took charge Saturday (Nov. 18) in Big Spring and never looked back. With a win over Kermit the Tigers advance to the area round of the playoffs after defying the odds and winning their first bi-district championship in decades. (Slatonite Photo/Cynthia Olivares)

The Tigers will face a bigger challenge on Friday when they travel to Abilene for a 3 p.m. game against the Comanche Indians.

Comanche comes into the game with an impressive record, winning their district championship in the 3A-1 Region 1 District 3 standings.

To win their district, Comanche earned wins against Jim Ned, Clyde, Merkel, Early, and Brady. The Indians come into the game after a 40-21 win against Boyd Friday.

Should the Tigers win on Friday, they will face the winner of the Merkel vs. Muleshoe game in the regional round of the playoffs.