Slaton ISD wasted no time in hiring a new coach to run its athletic department. 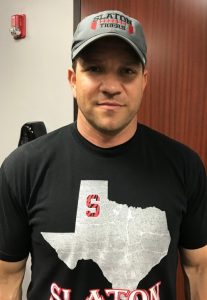 Caffey, the son of longtime coaches and educators, is in his second year at Slaton, having come from Ralls. He graduated from high school in White Deer and is a 2000 graduate of Sul Ross State University with a degree in kinesiology.

Caffey said he wants to foster a strong program guided by two principles.

As powerlifting coach, Caffey sent seven students to the regional meet and three to the state meet. He was also the defensive coordinator for a Slaton team that won its first bi-district title in 30 years in 2017. He intends to keep the same philosophy that worked last year.

“We run multiple 3-4 formations and the defense is staying the same,” he said. “Offensively, we’re going to have multiple spread options. We’ll keep the same concepts but will probably throw the ball more.”

Coaching runs in the Caffey family. Jeff’s father, Stan, was a longtime public school AD and his mother, Lynn, is also a retired coach and teacher. Stan currently is the AD at Brentwood Christian Academy in Austin. His brother, John David, is the AD and head football coach at Yorktown and his sister, Meredith, is the girls head basketball coach at Rockdale.

He has two sons — Drake, an incoming sophomore at Angelo State University, and Easton, who will be in second grade at Cathelene Thomas Elementary in the fall.